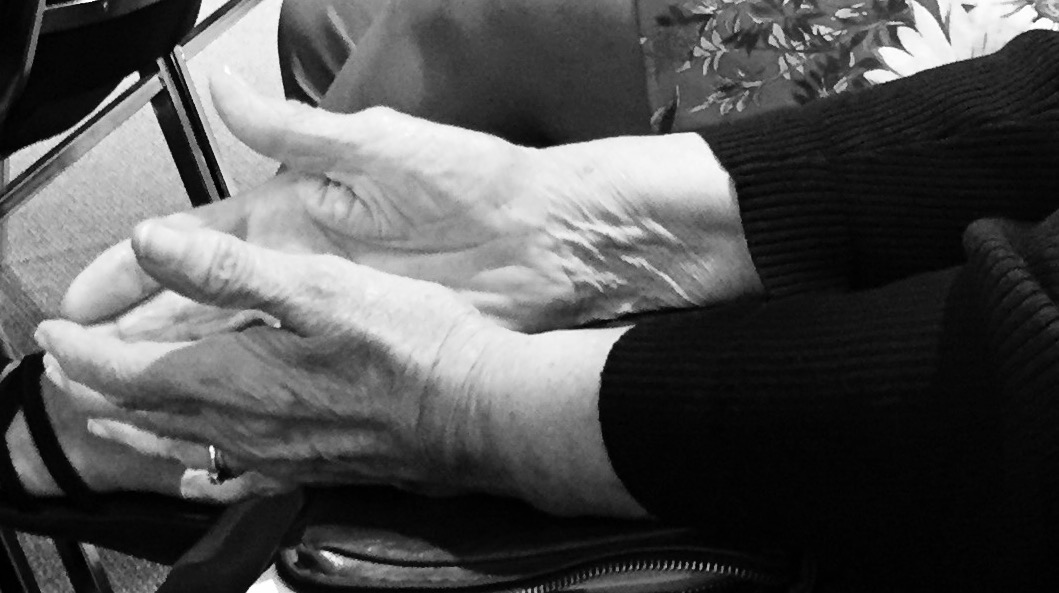 I was with a church in British Columbia recently, and looking down the row during a time of prayer, I saw a pair of aged hands stretched out in a receiving posture. The image struck me because I had been dwelling for a few days on the verse from Colossians 4:2, where Paul writes “Continue steadfastly in prayer, being watchful in it with thanksgiving.” I realized I was being given an image of that verse in a very stark manner. I quickly took a picture of of it with my phone so I would not too quickly forget the profound display of trust before my eyes.

The hands belong to my mother-in-law, who is battling the ever-encroaching dominance of Alzheimer’s Disease. Here she was, in a Sunday morning service sitting between her husband and youngest daughter, alert, present, and engaged. The likelihood of her remembering later that afternoon that she had been there was slim, but at least for those moments, fit between the worship songs and preaching of the Word of God, she was leaning in towards the One she has been leaning on for well over half a century. What she has rehearsed in prayer throughout those years when she was very aware and cognizant of her surroundings, is now carrying her through these years when she is not as aware due to this ever-darkening onslaught. She is anchored in the truths of the One she has been praying to all these years.

Watchful in it with thanksgiving.

I was reminded of something I had read by Zach Eswine a few months before in his book The Imperfect Pastor, that now took on deeper meaning for me as I considered this verse in light of my mother-in-law. He said “Start each day with this admission: regarding every person, every bit of creation, and circumstance that I encounter today, I must say to God, “I am in the dark”, and, “I’ve been mentored to distort what sits before my eyes. I must remember that when I enter the pulpit, stand by the hospital bed, take a walk, or sit in my chair to counsel another, I physically see people and things always as one at dusk.”

What a picture to me, and all others who have watched her, this posture of hands opened up to receive with thanksgiving from the One who is eager to give. Not because she has it all figured out or understands it all, but because she doesn’t. She’s in the dark. She is as one who is at dusk. And she stretches out to the One who isn’t.

She is a snapshot of all of us, to some degree. It may not be Alzheimer’s, but if we’re honest, we all are in the dark. It is a humbling thing to say we don’t have it all figured out. But it is an accurate thing. And a necessary thing. And all the education, philosophy, and religion we may reach out to doesn’t resolve it. Often, they can make it darker, if they don’t lead us to Him. After all, “I’ve been mentored to distort what sits before my eyes.”

Jesus says something profound in John 12:46. “I have come into the world as light, so that whoever believes in me may not remain in darkness.” Believing is trusting in, leaning on, and resting in all that He is. It is continually doing that in all of life, not just a one time occurrence, for there will be seasons that are darker, harder, and longer than others. It is a posture of reaching out to Him who enlightens. My darkness doesn’t have to remain.

Even as one who is at dusk.